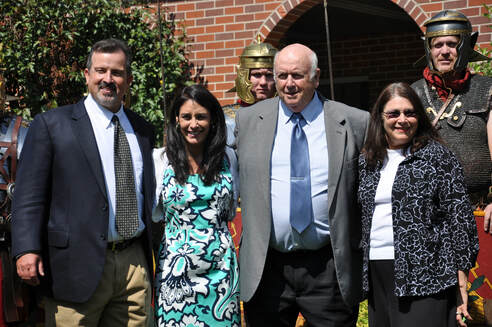 Foster Stanback, collector (far left) and John Clayton (center), for whom the museum is named
​The Clayton Museum of Ancient History featuring the Stanback Collection

Creation of the Clayton Museum combines the faith journey of the collector, Mr. C. Foster Stanback, the vision of his long-time friend Ramon Diaz, and a labor of love by York University alumna Amber Soderholm. The museum opened on September 12, 2015, following an 18-month-long process to create a space that would engage visitors and capture the intent of Mr. Stanback's remarkable collection. The museum is named for John Clayton, whose influence and life-long work in Christian apologetics was instrumental in Mr. Stanback’s decision to become a Christian. 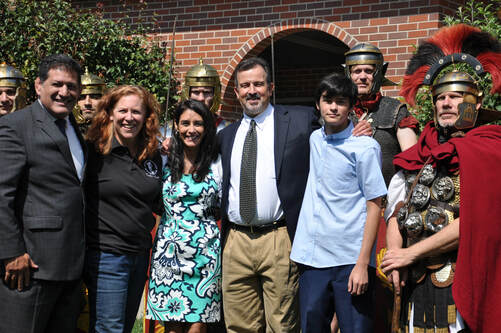 Ramon and Maureen Diaz (far left) with the Stanback family
​Following a changed heart and a decision to follow Jesus, C. Foster Stanback began to collect ancient artifacts with ties to the Bible. He knew the collection could not prove his faith, but he found that much of the record from antiquity served to confirm that the Bible is historically accurate. With that in mind, he intentionally collected pieces that demonstrate a connection between the story of scripture and the archaeological record of the ancient near east and the Roman Empire.

The Stanback collection includes weaponry, armor, tools, statues, personal items, coins and more. The core of the collection is focused around the Roman soldier during the first three centuries A.D. Display items range in age from an Egyptian mace head (~3000 B.C.) to leaves from Bibles (Erasmus New Testament, 1549, and the King James Bible 1612 edition). 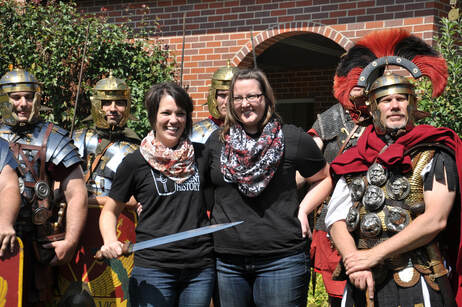 Kate Dibbern Fitch and Amber Soderholm, creators of the museum
The Clayton Museum of Ancient History was designed and created by Amber Soderholm, York University class of 2010. Ms. Soderholm's involvement with the museum began with an initial review of the collection in 2013. She later would serve as founding curator and museum designer for the main museum which opened in fall 2015, and an interactive space for children, the Little Kingdom, which opened in 2016.

Soderholm was assisted by artist, Kate Dibbern Fitch, who created the look and design for the facility and the exhibits.

​Amber's father, Robert Soderholm was also part of the creative process, building exhibits and display cases, walls, furnishings and more. Read more about the story of creating the museum, along with an interview with Soderholm shortly before she left the Clayton Museum in December 2017.